Something is happening here & you don't know what it is, do you, Mr Jones?

Richard Jones gave testimony under oath to the 7/7 Inquests on the afternoon of 12th January 2011. As J7 had previously noted, here, it was Mr Jones' many media appearances and accounts which helped propagate the 'suicide bomber' meme with regard to the Number 30 bus in Tavistock Square.

Mr Jones acknowledged during his testimony that he hadn't actually seen the man later identified as Hasib Hussain on this bus, as Hugo Keith was at pains to point out:

A. I mean, at no stage have I ever said that I actually saw the bomber. Right?
Q. No.
A. All I've ever, ever said was that somebody was acting unusually and annoying me on the bus.
Q. But I hope we've established, Mr Jones, that there appears to be no connection with the bomber and nor that that particular gentleman was doing anything other than acting as an ordinary member of the public, a passenger on the bus?
A. Correct.
Q. But your statement, I'm afraid, has been open to conjecture and surmise in the way of these things in the public domain.
A. Yes, I know.

"All I've ever, ever said was that somebody was acting unusually and annoying me on the bus", claims Mr Jones. The fact he said this on so many news channels and in the press when interviewed on the day and afterwards, was a point that Richard Jones and Mr Keith both chose to ignore; an oddity perhaps, given that Jones' various 'eye-witness' accounts were so widely publicised in the days after 7/7. In fact, during his many media appearances Mr Jones never once contradicted the suggestions that he did in fact see 'the suspect'.

Instead, the claim is made by Hugo Keith that Jones' many statements have 'been open to conjecture and surmise in the way of these things in the public domain'. This statement is interesting as the claim can be laid squarely, and solely, with the Government and the Home Office's Official Account of the 7 July 2005 London bombings, (the 'narrative'), a report whose anonymous author(s) state, 'summarises what the police, intelligence and security agencies have so far discovered about the bombers' and of which the then PM Tony Blair claimed: "We will bring together all the evidence that we have and we will publish it so that people, the victims and others, can see exactly what happened".

Of the 7 points made in the official narrative as "the key evidence indicating that these were co-ordinated suicide attacks by these 4 men", point 5 is:

Witness accounts suggest 2 of the men were fiddling in their rucksacks shortly before the explosions.

If the anonymous author(s) compiling the State's narrative actually had sight of the police and intelligence service evidence, rather than just media reports, how could they possibly have come to this conclusion? Is point 5 of only 7 points of key evidence merely 'conjecture and surmise'?

As for Richard Jones' diagram of the passengers on the lower deck of the Number 30 bus which he drew for the police on 9th July 2005, it is clear that he only had eyes for the 'Asian passengers' present. Apart from Male A the two other passengers he appears to have noticed, or at least the only two passengers he seems to have highlighted for the police, are both Asian females. What are we to learn from this about the racial prejudices and proclivities of Reuters' employee Richard Jones? 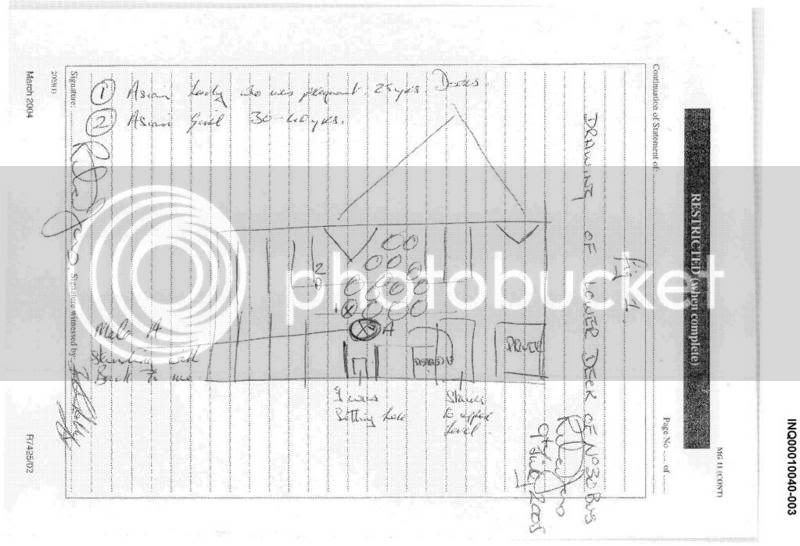 INQ10040-3: Drawing of Lower Deck of No. 30 Bus by Richard Jones
As J7 asked in our submission to the 7/7 Inquests - has the man who Mr Jones' describes as 'Male A' ever been identified? There appears to be no male of Mediterranean appearance, and fitting the descriptions given by Richard Jones in his interviews, in this diagram of passengers on the Number 30 bus prepared for the 7/7 Inquests: 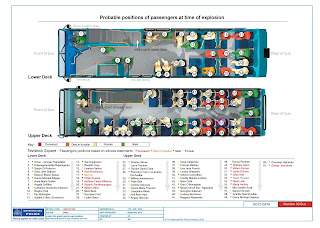 INQ10285-6: Probable position of passengers at time of explosion (No. 30 Bus)
What else in the State's official narrative - amended twice since its publication - is also based on such shoddy and unsubstantiated evidence as that given by Richard Jones? How much of the remainder of the narrative is actually based on 'conjecture and surmise in the way of these things in the public domain'?
Posted by Bridget at 1/17/2011 10:06:00 am