The official narrative would have us believe that three of the 7/7 accused, Khan, Tanweer and Hussain, left Leeds in the early hours of the morning of 7th July 2005 after visiting 18 Alexandra Grove (the apparent 'bomb factory') and loading a rented Nissan Micra with home-made explosives of the type shown here:
Enlarge 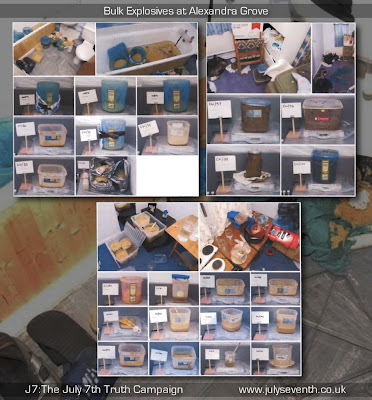 According to the testimony of senior forensic investigator, Clifford Todd, only one of these substances was shown to be potentially viable as an explosive.


Q. Were there different types of sludge at the address?
A. Yes, there were two types. One was much darker than the other. One was a fairly light, sandy, yellow-brown colour. The other type was a much darker brown colour.
Q. Was there a difference between them, their effects?
A. Yes. The darker brown material, after various tests done at the laboratory, was found not to be energetic, so would not work as an explosive. The lighter, sandy-coloured material, that was shown, in at least one specific case, to be a high explosive.

That none of these containers could be forensically linked by either DNA or fingerprints to any of the four accused is an area which received no scrutiny or examination when DC Reynolds, of SO15 Counter-terrorism Command forensic management team, gave his testimony. Hussain's fingerprints were apparently found on only one plastic container which it was claimed contained HMTD. [1/02/2011 p13 13-15]
So, after collecting approx 40Kg of a light brown sludge that in "at least one specific case" could potentially possess explosive properties, the three men drove off in the rented Nissan Micra. Of note is that any less than "at least one specific case" would in fact mean that the sludge was potentially explosive in exactly "no specific case".

Despite much discussion of counter-surveillance methods by the use of 'operational phones' solely for use between the four accused, Shehzad Tanweer appears to have been quite content to give his 'operational phone' number on the rental agreement for the hired Micra. We know this because it is claimed that the car hire company called this phone on 7th July at 14.58, although, perhaps a little strangely, this was before the end of the rental period and we can only wonder what might have prompted this contact. This point was also contradicted by the statements from the car hire company read to the Inquests on 14/10/2010. [See pages 44 & 47] 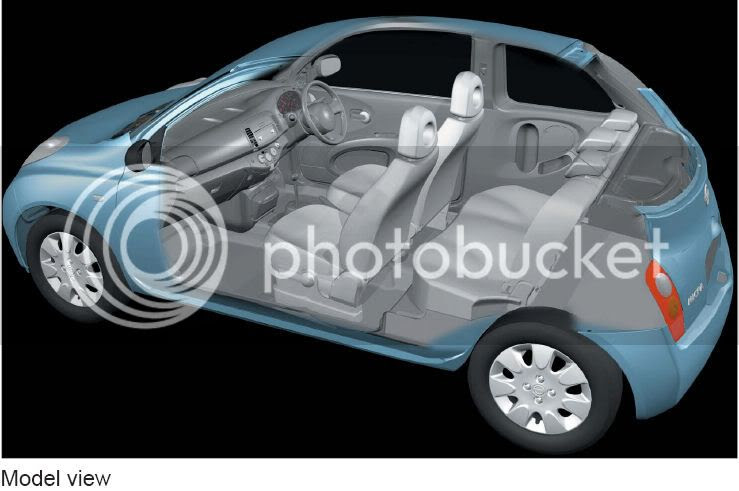 The Metropolitan Police diagram of a Nissan Micra adduced in evidence to the 7/7 Inquests
A Nissan Micra is a very small car with a very limited boot capacity - yet it contained three men, two cool boxes, 40Kg of bulk explosives, five large rucksacks and a variety of other items, as shown in the picture below:
Enlarge 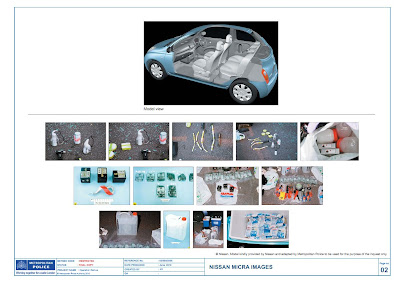 The items that were forensically linked to Khan, we are told, did not include the rucksack left behind in the Micra, nor the cool boxes which presumably contained the explosive substance, but  were  instead innocuous everyday items to which everyone can be forensically linked at a moment's notice: carrier bags, biros, sweet wrappers, etc.
Enlarge 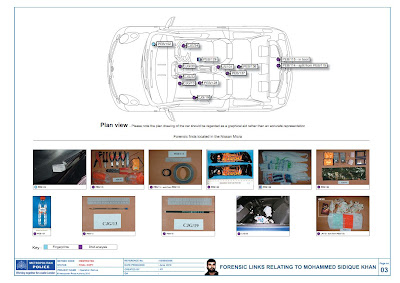 According to the read statement of Sarah Lancaster, a Senior Case Officer in the Forensic Explosives Laboratory, also contained within the Micra must have been freezer ice blocks:

Based on my observations at the scene, my subsequent examination of the items submitted to this laboratory and in conjunction with the police photographs provided, it is my opinion that the damage in and around carriage 6713 of the Circle Line Underground train was consistent with a detonation of several kilograms, probably in the order of 10 kilograms, of a high explosive substance. [2/02/11 p46:6] 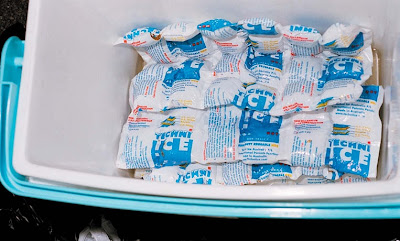 After arriving at Luton station car park, and parking next to Lindsay's Fiat Brava, we presume that the men stood at the boot of the Micra and assembled their explosive devices - if they were already packed, primed and ready to go inside the rucksacks there would have been little need for the ice packs inside the cool boxes. It is also hard to see where five rucksacks already packed with explosives would have fitted into the Micra along with the three men as the boot was already full with the cool boxes.
Would any serious 'terrorists' with murder on their minds choose to park at a busy commuter station next to a pay and display machine and adjacent to an exit from the car park - in the position that the two blue cars can be seen in the image below - during the early morning rush hour if they were intending to construct these devices, packing them with ice packs and inserting initiating devices of wires, light bulbs and batteries? Standing at a boot of a car at a busy commuter station on the outskirts of London during one of its busiest times, in broad daylight, all watched over by CCTV machines of convenient fail?
Enlarge 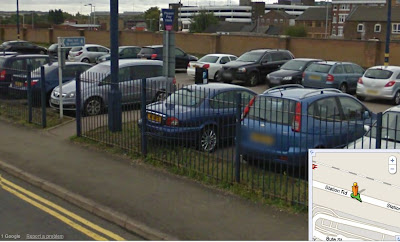 Luton Station car park showing the area where the Brava and Micra parked
Is it even vaguely credible that the scenario described above is actually what really happened on the morning of the 7th July 2005?
Really?
Posted by Bridget at 6/15/2011 08:56:00 pm 9 comments: