Reva Cope and Regina Friel both featured in an article in the Sunday Times Magazine on the 4th December 2005 titled 'The Survivors'. They each recalled how after managing to get off the Number 30 bus after the explosion they went to Lynton House where they were looked after by office staff. 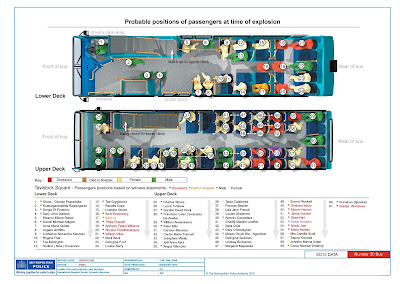 Regina Cope is number 14 and Regina Friel number 10 in this diagram
Curiously neither of these passengers were called to give evidence, nor were witness statements from them read out! Nor were any witnesses from Lynton House who aided the survivors called or had statements read and Lynton House is hardly mentioned during the 7/7 Inquests!

One of the passengers who did give evidence Gary O'Monaghan recalled how after getting off the bus “I landed on my feet and just started to run” [14 Jan p36:13] and “This is perhaps why I ran away fearing it would explode again” [p36:21]. He is, however, almost certainly the 'Gary' who appeared at The London Assembly 7th July Review Committee in 2006 and stated (page 202) that he had gone into the 'E.C.Harris Building' (which is Lynton House) and then declared (page 208) “I was staggered when I left. The whole foyer of the building was full with people on trolleys like that, all bandaged up”.

Interestingly another witness at the GLA Inquiry 'Beverli' who wasn't on the bus but worked in Lynton House for a consultancy firm that was involved with Olympic delivery recounted how she and her colleagues “were told as staff, that we were banned from talking to anyone - particularly the press, which was an immediate dismissal offence - police, or anything regarding the experience”(page 35).

An official reference to Linen(sic) House does appear in the document INQ10129-2 which was called up by Mr Andrew O'Connor QC on the morning of 19th January [p12:16]. This is a copy of a police log which, timed at 10:10:55, states “have 10 inj'd persons at Linen Hse 7-12 Tavistock Sq, WC1”. Possibly by coincidence, possibly not, Mr O'Connor a short while later [p36:21] whilst questioning WPC Kerslake, states incorrectly “The BMA building is where you see the words Lynton House, that's the name of the BMA Building”!! 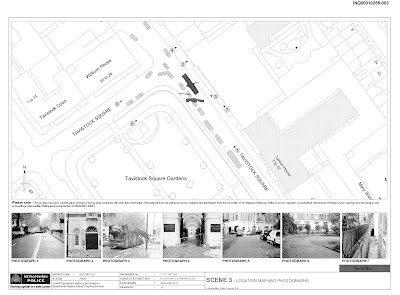 A not dissimilar exchange can be found in the transcript for the afternoon of the 19th January, Michelle Du-Feu: ”At the time he (the security guard) was actually in the building immediately before that. I think its called Lynton House or something” [p6:22]. Mr.Andrew O'Connor: “I see. In any events the BMA building's on that side of the pavement. We know where the bus was just opposite” [p6:24].

[Editor: Lynton House was presented with a plaque from the Metropolitan Police almost immediately after, this report is date 19/07/05: "The lobby of Morley’s building, Lynton House, became a makeshift hospital for the wounded immediately after the attack. Some of the firm’s own first aiders were among the first on the scene after the bus was devastated by the bomb. At least another 20 businesses occupy space in Lynton House, and the Metropolitan police has presented a plaque for the building’s lobby area commemorating the help given by staff working in the building." source]

We can only speculate at the reason for all the official coyness. Could it be the numbers involved?

'Jaki Turner' wrote on the BBC London blog 'BBC London Bombings - 7 July: One year on': “Last year at this time I was working at Tavistock Square when the bus went up next door and we the first aiders at Lynton House dealt with some 35 people hurt on the bus”.

If we add those 35 to the casualties dealt with in the BMA Building and the County Hotel as well as the BTP Headquarters, Great Ormond Street Hospital, The Tavistock Hotel, Tavistock Court and the offices of the Rev Deborah Hodge, the three who PC Walker put into civilian vehicles and the five who Walter Hayden set off to UCL Hospital with and then factor in the “at least 13 patients” that Ambulance Officer Williamson had at Tavistock Square south and “the number of people with minor cuts and injuries” Dr David Tovey reported as being outside the back of the BMA building there will be a total considerably in excess of the 47 non-fatalities on the bus!

Which in turn raises other interesting questions!!

*David Minahan was by occupation a claims investigator for an insurance company and later a leading firm of solicitors and has experience of "forensic" matters. David was also the National President of a major Trade Union (MSF now merged with the AEEU to form Amicus). David researched and wrote the London Bombings Dossier published on the J7 website and says he is convinced that there has been a massive cover up and campaign of disinformation about the events of 7/7.
Posted by Bridget at 4/07/2011 07:07:00 am