You Couldn't Make It Up!

Twenty five of the passengers who survived the explosion in the first carriage of the Piccadilly line train have given evidence, either in person or writing, to the 7/7 Inquest. This reveals that 12 of them actually entered the train at King's Cross, five of whom, Tracey Brade, Gillian Hicks, Garri Hollness, Paul Mitchell and Philip Patsalos recall getting on through double door 5 i.e. near where the explosion subsequently took place. Paul Glennerster was uncertain if in his case it was door 3 or door 5. 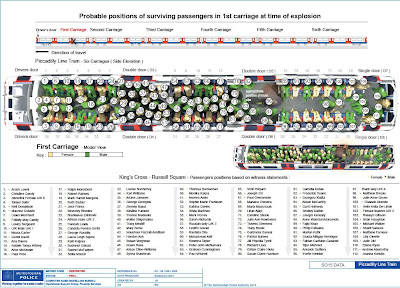 None of these witnesses had any recollection of seeing Germaine Lindsay!

Olawale Akarele, who entered through door 5 but further up the line at Turnpike Lane, indicated in his evidence on the morning of 1st December that he may have seen him. However his testimony was far from convincing and he admitted when questioned by Mr. Keith that he hadn't mentioned this in a statement made four weeks after the event, going on to say “Don't know for sure, just in the picture triggered”.[p69:7]

Later he revealed to Ms Gallagher that his recollection was of a big Afro Caribbean man wearing a yellow or green T-Shirt and no baseball cap![p90:2]

What no one disputes is the crowded conditions of the platform and the train.

Raymond Wright, the London Underground driver who travelled in the cab alongside Tom Nairn and assisted with the evacuation of many of the passengers, told how when he arrived at the platform the barrier was closed as a result of this overcrowding, and he was only allowed through because he was wearing his uniform.[p2:18] (It is perhaps worth reflecting that this would make it unlikely that Germaine Lindsay could have hurried on to the platform “at the last minute” after rushing across from the Thameslink Station. The scenario we were expected to accept at least until “the goal posts were changed” and he and his companions were “placed” by the Inquest, on the earlier 7.25am train from Luton).

It is surely surprising that somebody squeezing on to the train, encumbered by a large rucksack, (”very large, about waist height” according to Julia Roberts the forensic scientist [1st Feb pm 87:6]) didn't attract attention!
The forensic evidence given by Clifford Todd, the principal Forensic Investigator from the Forensics Explosives Laboratory, on the 1st February, is extremely interesting. The prognosis being that the explosions were ignited by a charge from a battery source or other electrical supply acting as a trigger for a small amount of the highly volatile substance HMTD, which in turn set off the the main “mix” of up to 10 kilograms of hydrogen peroxide/piperine!

Simply a matter of activating a snap connector or just attaching the leads to the battery in order to complete the circuit the court was told.[p45:25]

Quite how simple it would have been to carry out this task rummaging in a rucksack whilst standing up in a crowded train only seconds after it had pulled out of the station is perhaps open to conjecture!

Surely more significant, however, is the revelation made by Mr. Todd [p48:29] that at Russell Square no traces of HMTD, nor the hydrogen peroxide/piperine homemade explosive or indeed any other explosive was found! Nor indeed was there any trace of an initiator. [p55:12]

Apparently the strength of the explosion was such that all were obliterated. [p49:13]

This of course prompted the question as to how pieces of the identification documents, passport, addressed envelope etc. which Germaine Lindsay, and his three co-conspirators, had obligingly brought with them, had survived?

With commendable candour Mr Todd reflected “that whilst it is always possible that there could be some circumstances where they might survive in a fairly undamaged state, maybe at one scene, but the fact these were found in all 4 scenes, at least to some extent, in this state does quite strongly suggest to me that somehow or other they weren't actually on the person or in the rucksack”! [p59:14]

The implications of this seemed to send the inquest temporarily into some kind of legal “la la land”!

Lady Hallet put forward the suggestion that there might be an indication of “a concerted effort to ensure identification” (presumably she meant by the “bombers” rather than the authorities?). Whilst Mr Keith. although “not wishing to set any hares running” wondered if there might have been somebody else at the scene carrying this documentation” (a sort of suicidal equerry?).[p61:6]

Eventually it was agreed that the most plausible explanation was of the documentation probably being carried by the deceased in something like a plastic bag rather than in the actual rucksack and, therefore, being shielded somewhat from the effects of the explosion!
Plausible or not this quite overlooks the problem that Germaine Lindsay's body was apparently moved post explosion to an area at the end of the carriage where, according to Det. Insp. John Brunsden giving evidence on the morning of 17th December, most of the remains of the documentation were also found! 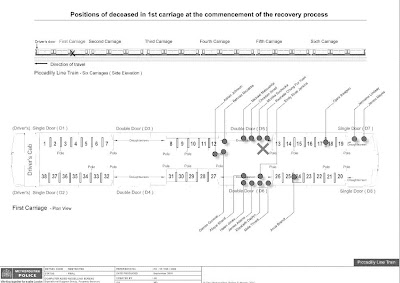 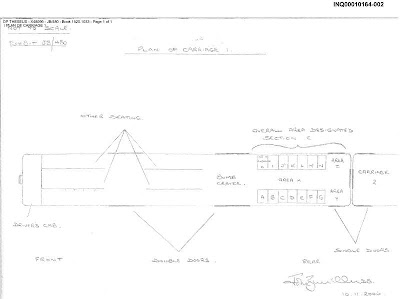 Documents were recovered from area Y

Perhaps, therefore, we should speculate whether Lindsay had some kind of pre-death premonition that his body was to be moved and left the plastic bag there before returning to the area where the explosion was to take place? Perhaps the bag was by his side all the time but miraculously the contents were blown over the other passengers to settle in the area where the body was eventually placed?

The phrase “You couldn't make it up” would seem to be appropriate!

Except that somebody apparently did!

*David Minahan was by occupation a claims investigator for an insurance company and later a leading firm of solicitors and has experience of "forensic" matters. David was also the National President of a major Trade Union (MSF now merged with the AEEU to form Amicus). David researched and wrote the London Bombings Dossier published on the J7 website and says he is convinced that there has been a massive cover up and campaign of disinformation about the events of 7/7.