A cat amongst the [stool] pigeons - Mohammed Junaid Babar

An article in today's Guardian asks some of the questions that J7 posed to the 7/7 Inquests when we sent our submission on Preventability to the coroner and counsel in July 2010.

In light of the Guardian series of articles regarding this issue, we reproduce below our submission listing the serious issues that arise from the role that Mohammed Junaid Babar has played in the events of not only 7th July 2005 but also the so-called 'fertilizer bomb plot', apparently scuppered by Operation Crevice, and also the incarceration of Fahad Hashmi:

Without the testimony of 'Supergrass' Mohammed Junaid Babar at the Crevice trial, would there have been enough evidence against these men to merit the 40 year life sentences they received? Especially given the statement read on behalf of these men at the end of the Crevice trial explicitly denied that there was any plot to attack the UK:

This was a prosecution driven by the security services, able to hide behind a cloak of secrecy, and eager to obtain ever greater resources and power to encroach on individual rights.
There was no limit to the money, resources and underhand strategies that were used to secure convictions in this case.
This case was brought in an atmosphere of hostility against Muslims, at home, and abroad. One stoked by this government throughout the course of this case.
This prosecution involved extensive intrusion upon personal lives, not only ours, but our families and friends.
Coached witnesses were brought forward. Forced confessions were gained through illegal detention, and torture abroad. Threats and intimidation was used to hamper the truth. All with the trial judge seemingly intent to assist the prosecution almost every step of the way.
These were just some of the means used in the desperate effort to convict. Anyone looking impartially at the evidence would realise that there was no conspiracy to cause explosions in the UK, and that we did not pose any threat to the security of this country.
It is not an offence to be young, Muslim and angry at the global injustices against Muslims."9

The section in the Provisional Index of Factual Issues entitled “Preventability” comprises by far the bulk of the index. Further, the bulk of areas outlined in points 13-23 relate directly to just two of the accused, Khan and Tanweer, and their interactions with others connected to Operation Crevice, notably, and mostly, Omar Khyam. There are wider connections over and above those between Khan (now deceased) and Khyam (serving a life sentence, received in no small part due to the testimony of the prosecution's 'star witness'14 Junaid Babar), featuring individuals that appear to create and facilitate links between disparate individuals and groups across continents, and we outline these for informational purposes below. Many of these individuals appear to have protected status in that they have either never been arrested or have miraculously evaded prosecution over a period of time when many lesser figures were rendered to the torture chambers of Abu Ghraib or Guantanamo Bay.

Much is made of the failings of West Yorkshire police and the security services to properly investigate and/or assess Khan and Tanweer, particularly in the two years prior to 7th July 2005. However, there is an important question to be asked here:

How would Khan and Tanweer have known that they were not under investigation given the following facts:

29 March 2004: Momin Khawaja was arrested in Canada in the culmination of what was reported as a “a month long sting operation”

30 March 2004: Eight arrests were made of men who were known to Khan and Tanweer as part of Operation Crevice.

June 2004: news broke that the FBI had been holding Mohammed Junaid Babar in custody in New York since April 2004. It was reported that he was negotiating a plea bargain with the authorities.

Junaid Babar, a US citizen had being widely reported since November 2001, declaring support for the 9/11 attacks and announcing he was recruiting fighters to fight against US forces in Afghanistan:

As the TV camera rolled Mohammed Junaid Babar’s eyes shone indignantly behind nerdish glasses: “There is no negotiation with the Americans. I will kill every American that I see in Afghanistan, and every American I see in Pakistan.”15

“The conundrum still remains, though. Why did Babar talk to me so willingly in the first place? It’s a question that I’ve been asking myself for more than six years. Some suggest that he may have already been an FBI agent.“16 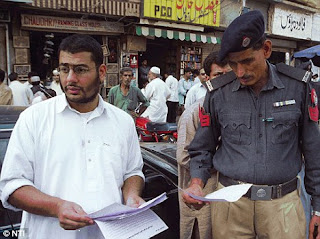 Despite making inflammatory and widely publicised pronouncements about being an Islamic warrior, despite seemingly declaring war on Americans, and despite his being a key facilitator in the alleged “terror training camps” in Pakistan (akin to the U.K equivalent of 'Q', Mohammed Quayyum Khan, also a part-time taxi driver), Junaid Babar appears to have been allowed to travel freely between Pakistan and the UK, as shown by the Operation Crevice timeline compiled by the Metropolitan Police17.

2001-2004
· Pakistani-born Mohammed Junaid Babar leaves his home in the USA, just days after 9/11 and travels to Pakistan to live

The results of a joint BBC Radio 4 File on 4 and Newsnight investigation also revealed that, “We understand that Siddique Khan was also seen with this man [Junaid Babar] in Leeds in 2003.”18

Hassan Butt, who first facilitated Junaid Babar's stay in Pakistan19, describes a meeting between Babar and Khan in Leeds, held after attending a barbecue to raise money for 'training camps' which is attended by a number of prolific propagandists and provocateurs for 'extremist' 'Islam'.

Butt reveals that after the jihadist barbecue he drove to Khan’s home near Leeds with another guest, Mohammed Junaid Babar, who would shortly become a supergrass. Babar’s testimony helped to secure the conviction last week of five members of the Crevice gang, who had planned to blow up — among other targets — the Bluewater shopping mall in Kent and the Ministry of Sound nightclub in London.

Although Babar describes the barbecue in his testimony, he does not refer to the drive north, nor to some of the guests named by Butt.
...
The host was a long-standing activist of Al-Muhajiroun, the group set up by Sheikh Omar Bakri in 1996
...
The guest list included men who were later to become notorious. Among them, claims Butt, was Mohammed Quayyum Khan, a part-time taxi driver from Luton who is alleged to have sent Mohammad Sidique Khan to the Malakand training camp on behalf of Al-Qaeda.
…
Butt, who had borrowed his brother’s navy blue Audi TT to get to the party from his home in Manchester, decided it was time to head back north. Babar asked to be dropped off near Leeds. ..

As the sun rose, Babar directed Butt to a terrace house in Batley, West Yorkshire, 15 minutes from the M1. A man in pyjamas came out to greet them. It was Mohammad Sidique Khan.

Butt had met Khan before. Babar had introduced them in 2002 at a gathering at Butt’s flat in Islamabad. Khan now recognised Butt and asked him if he wanted to come in.20

How likely is it that the joint intelligence services of the US and UK were not tracking Babar or Butt in the UK, particularly given Babar's high profile? Which of these two individuals was being tracked and to what extent? How was it possible that Junaid Babar was allowed to travel so freely between Pakistan and the UK?

FOI requests to the Foreign & Commonwealth Office submitted by J7 have been refused in respect of attempts by independent researchers to assess this information.

On Babar's second visit to Britain, he stayed with Fahad Hashmi in London and left behind some waterproof socks and a pair of night vision goggles. Junaid Babar went on to become the State's star-witness for the prosecution in the Crevice and Khawaja trials, and his testimony also resulted in a 15 year sentence for Syed Fahad Hashmi, who had previously been extradited to the US from the UK on the basis of the “glorified camping equipment”21 that Babar had left at Hashmi's residence. This was then reported as:

Hashmi, who moved to Britain from Queens in 2003, allegedly allowed his London flat to be used to store supplies and money that Babar was shipping to Abdul al-Hadi al-Iraqi, then head of al Qaeda operations in Afghanistan.22

Hashmi spent over 3 years under SAMS, extreme measures which included total isolation whilst facing a life sentence for this 'crime'.

Babar was also the source for the aluminium powder which featured in the Crevice trial.

The government would further prove that the defendant purchased and attempted to purchase the aluminum powder and ammonium nitrate that he knew would be used in explosive devices in the bombing plot in the United Kingdom, and that he did this throughout from December 2002 through March of 200423.

On 6th April 2004, Babar returned to the US but was not arrested or detained until 10th April 2004 when he was picked up by the FBI whilst on his way to a 'taxi school' in Queens, NY.

This is just a week after the Operative Crevice arrests; was his work now done? How did he manage to escape the 'no-fly list' to re-enter the US, given his well-publicised running and facilitating of 'terror training' in Pakistan?

To reiterate some of the questions that J7 posed to the Coroner that now require urgent answers if we are to understand what truly happened on 7 July 2005, how it happened, why it happened, and who made it happen:
Ms Gallagher has raised some of the issues presented in the Guardian articles during this morning's Inquests hearings. She spoke on behalf of Mr Foulkes, father of David Foulkes, who was interviewed by the Guardian and quoted as saying "the terms of reference of the inquest are too narrow to deal with such questions and thinks that it should be suspended while they are re-evaluated":

.. He's asked me to make clear that his concern is not that scope is too narrow and, indeed, the scope ruling fully encompasses the issue of preventability and it's going to be explored next week, but what he does want to ensure is that the inquest has all relevant information and is in a position to fully explore this issue, including the potentially new information referred to in the article and the material that he's seen. Mr Foulkes is, of course, aware that there are PII materials which we haven't seen. It may be that this wasn't a new issue to the Inquest team and to you, my Lady. It may be that this is covered in bundle A and bundle B, which the legal teams and the families haven't seen. But Mr Foulkes' concern is this: he wishes to ensure that the Security Services give a clear statement to the inquest: (a) that they're not aware of any basis for the suggestion that Babar had been an informant for the authorities for any country prior to his detention in New York City in April 2004; and (b) that they've provided to the Inquest team and the coroner all information which they have in respect of Babar and US/UK communications in respect of him, and Mr Foulkes' comment to the press --
LADY JUSTICE HALLETT: As relevant to these proceedings.
MS GALLAGHER: Precisely. Mr Foulkes' comment to the press was intended to suggest that, if the Inquest team didn't have those assurances, then suspension might be required, and it's an understandable and defensible comment which he made at the time in those circumstances.