Behind the Scenes of the Aldgate Explosion, at 11 minutes to 9

So we can say with confidence that the explosion at Aldgate occurred at that moment, 08.49.00

J7's submission to the Coroner, detailing questions and anomalies that have arisen regarding this event, can be downloaded here. and our analysis of the events at Aldgate can be viewed on the J7 website here.

Week Two of the 7/7 Inquests has concentrated on the issue outlined in the Provisional List of Factual Issues as:

The explosions and the immediate aftermath
3. Circumstances at each of the four scenes immediately following the explosions

The first scene under scrutiny is Aldgate.

Compared to the first week of the inquests, this second week has been particularly harrowing, hearing the reports about those who died and the stories of others who were severely injured. Tales of humanity and heroism have also emerged, along with inspirational accounts of overcoming horrendous injuries.

Mr Hugo Keith QC, Counsel to the Inquests, opened the proceedings by reading a statement which has not yet been released onto the Inquest website. Reading statements to the Inquests presupposes that none of the information it covers is contentious and the author will not be open to questioning. This following statement was prepared by Mr John Porter, a London Underground power control room manager, written on 26 July 2005, and followed by a supplementary statement dated 29 September 2010:

"When the device on the train between Liverpool Street and Aldgate stations exploded, it damaged three power assets, an 11-kilovolt feeder cable number 642", which is the feeder cable to which I made reference in my opening "running along the tunnel wall and its associated pilot cable, pilot number 62, and a signal main cable between Moorgate and Tower Hill which provided the power for the signal supplies between Moorgate and Aldgate. "The danger to the number 642 feeder cable caused the 11-kilovolt electrical feeder to trip at Moorgate substation at 08.48.40. This in turn caused the 22-kilovolt coupling transformers, which supply the Mansell Street distribution network, to trip at 8.49.02. This caused widespread power disruption to a significant area of the London Underground network."

To illustrate the widespread disruption caused by the loss of power at Mansell Street. this image was shown and released as evidence: 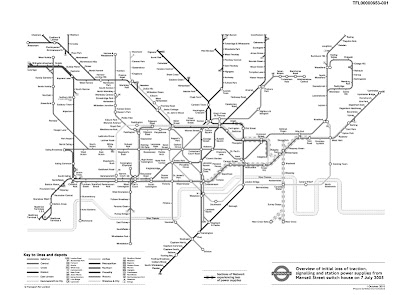 Click to Enlarge
We'll let Mr Keith off with the 20 seconds between the "11-kilovolt electrical feeder tripping at Moorgate substation at 08.48.40" to allow him to remain confident of his opening statement, after all, what's 20 seconds in the grand scheme of things? Perhaps he has a pressing need for this first event on 7 July 2005 to have the significance of occurring at 11 minutes to 9?

London Underground runs a train monitoring system called Trackernet. TrackerNet is one of London Underground's key operational systems that monitors the whereabouts of every single underground train on the network. The system received a lot of coverage earlier this year when TfL lifted all restrictions on the commercial use of its data and provided access to real-time train information.
Tim O'Toole, the Managing Director of London Underground at the time of the events of 7 July 2005, released a series of Trackernet images at a press conference on July 9th, saying:

"You can see what has happened is the track circuits on all of those other lines, you can see the orange lines indicate that an event has occurred to trip out the power system. And that was almost certainly the blast. And this software allows us to confirm the timings."

Quite what the Trackernet image for train 216 at Edgware Road has to do with the Provisional List of Factual Issues, 3 and the "Circumstances at Aldgate immediately following the explosions" only Keith knows.
After five years of dedicated and dogged research J7 might hazard a guess that the reason for this could perhaps be that the explosion didn't actually occur at Aldgate at 08.49, despite all Mr Keith's efforts to make it so.

This Trackernet image of the time of the explosion has been annotated by J7 using the Working Time Table for the London Underground, which we obtained through a Freedom of Information Request. The information it contains may well be the reason Mr Keith hasn't shown any Aldgate Trackernet images at the 7/7 Inquest. 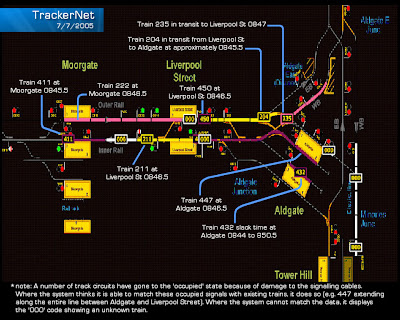 Click to Enlarge
Circle Line train 204 has left Liverpool Street and is in the tunnel on its way to Aldgate station. All other trains in this image are also in their correct places, according to the Working Timetable, if the time of this explosion is 08.46.30, the time that train 204 was in transit to Aldgate, not 08.49. Unless all these trains were running late on the London Underground, Circle Line train 204 would have been in transit between Aldgate and Tower Hill at 08.49. Train 204 appears to have been running on time; a FOI Request to TfL, asking for the time that it was at King's Cross received the response of 08.35 - corresponding to the timetable.
The time of 08.46.30 is also confirmed by the only CCTV footage that has been released to date from any of the stations that were affected that morning, showing Liverpool Street station as Circle Line train 204 arrives and leaves, and the moments when smoke billows from the tunnel whilst commuters run back along the platform in reaction to the noise:

As Circle Line 204 was due into Liverpool Street at 08.44 and the CCTV footage is showing a timestamp of 07.44.20, it is likely that this footage is one hour out due to the adjustment for British Summer Time rather than the time being out by the odd figure of 1 hour and 3 minutes claimed by DI Kindness in an exchange with Mr Keith:

A. [DI KINDNESS] This footage will show the frontal view of the 204 train number, Circle Line train pulling into Liverpool Street station, and it's coming towards the camera at the moment.
Q.MR KEITH] Officer, this is Liverpool Street. It stands to reason that the bomb, if it entered the train at King's Cross, is already on that train.
A. That's correct, sir, yes.
Q. As is the bomber.
A. That's correct. This image shows the last -- the first carriage of the train.
Q. The timing in the top left-hand corner, although the CCTV itself shows 07.44, did your researches show that, in fact, the CCTV system itself was one hour and three minutes slow?
A. That's correct, sir, yes.
Q. So we mustn't be misled by that timing. The timing of this is, in fact, 08.47 or thereabouts?
Source: Transcripts 14 October 2010
Afternoon session, page 9, Lines 5-24

Incorporating the adjustment for British Summer Time, Circle Line train 204 leaves Liverpool Street at 08.45.40, and the explosion happens (according to the smoke & passengers running) at 08.46.35. (Note: There are 39 seconds of footage missing). This is exactly the time estimated by J7 for this explosion according to the Trackernet image, evidence which Mr Keith has chosen not to exhibit.
To ensure that even the British Transport Police officer, DI Baker, present at Aldgate on 7 July 2005, has got his timings wrong, and to ensure Mr Keith can maintain his confidence in his and the narrative's timing of 08.49, there is also this exchange during the Inquests:

LADY JUSTICE HALLETT: Sorry, can we just go back? The time of this second call?
MR KEITH: According to the transcript, my Lady, it's 08.52.40. There has been a certain degree of confusion, I think, in the past as to whether or not that time indicates the beginning or the end of the call. These transcripts have been revised now a number of times to reflect the accurate time of each call. My learned friend Mr Gibbs might be able to assist in relation to whether or not that time indicates the beginning or the end of the call now.
MR GIBBS: It indicates beginning of the call.
LADY JUSTICE HALLETT: Right, so it indicates that a call is made by Mr Baker at 08.52.40 and a second or two into
MR GIBBS: That's right. Whether that timing is accurate is a matter still of some conjecture, but that is the timing that we have.
LADY JUSTICE HALLETT: Well, Mr Baker, on the question of timing, given we know what time the explosion occurred, does 08.52.40 seem to be about right for when you made the second call?
A. [DI BAKER] It does. We were there pretty much instantly and trying to ascertain what was going on, so it was merely a few minutes.
LADY JUSTICE HALLETT: Thank you.
MR KEITH: My Lady, if it assists, may I just refer you to the Aldgate time line, which is at INQ10426 [INQ10426-1]? The first entry you may recall from the opening is at 08.47.38, which is a BTP call from London Underground, but we know from the absolute time at which the explosion occurred, which was 08.49.00, that that call, which is taken from the same exhibit, BTP167 must therefore be about one minute and 40 seconds out, and that is our best estimate as to the accuracy of those transcripts.
LADY JUSTICE HALLETT: So if that was right then this call is about 08.54?
MR KEITH: Absolutely.

Editing transcripts? Adjusting CCTV timings? Withholding Trackernet images? All to make the 08.49 timing fit? Fixing the evidence to fit predetermined facts? Whatever next?
This is insulting to the bereaved and survivors who deserve the truth, and is not the role of the Inquests which, if it is to fulfill the proper function of an Inquest, should be examining the evidence to uncover the facts, particularly when one fact, based on the available evidence is:

After just two weeks into a five month hearing, can anyone have any faith in this Inquest process?

Accounts of power surges and electrocution and whether Shehzad Tanweer was actually sighted on train 204 to follow.
Posted by Bridget at 10/20/2010 06:21:00 pm