"In the next image, this is the last sighting of Lindsay, Khan and Tanweer. This was the first CCTV sighting that we had on the unit on this enquiry as they pass through towards the underground station."
DI Kindness, to the 7/7 Inquests 13 October 2010 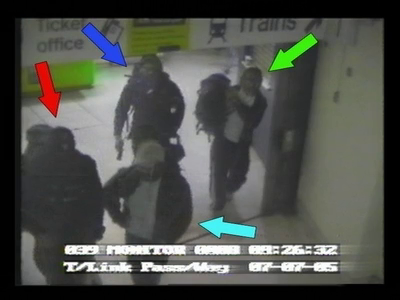 Q. [Hugo Keith QC] Can you recall on what day you first spotted a number of men walking through the King's Cross area, in particular through the Thameslink station carrying rucksacks?
A. [Detective Inspector Ewan Kindness] It was on 11 July 2005, sir.
Q. So on the Monday?
A. It was, yes.
Q. Can you recall what it was about the appearance of those men on the CCTV that alerted you to the fact that you might have identified the bombers?
A. My officer, who was engaged in the actual CCTV recovery, was ex-military. He saw the four individuals walking through and they were walking two by two and he felt it was significant. They were carrying large rucksacks and he brought my attention to it. I concurred with him that it was a matter of priority for us.
Source: Transcript, 13 October 2010
Morning session - page 6, lines 12-25

On Day 4 of the Inquests it became clear that the image above was the last piece of CCTV, according to the Metropolitan Police, that exists of the four accused together anywhere near King's Cross underground station and also the last of Khan, Tanweer or Lindsay.
CCTV footage of Hasib Hussain outside King's Cross was shown to the Inquests and released to the press. However, no other footage exists, we are told, that shows the movements of Khan, Tanweer or Lindsay after the King's Cross Thameslink was captured. Why not? Especially when on 11 July 2005, Deputy Chief Constable of the British Transport Police, Andy Trotter, boldly announced, "The Underground network is a CCTV-rich environment".
The exchange below, between Mr Patterson QC, counsel for the bereaved, and Detective Inspector Ewan Kindness, provides further details. Details which only become apparent to keen listeners in attendance at the Inquests or eagle-eyed readers of the transcripts because, as usual, major show-stoppers in the official "narrative" of 7/7 are regularly and completely ignored by the press.

MR PATTERSON: Officer, we then watched the footage -- and I don't think we need to play this, thank you -- of the men entering the railway station. In fact, we don't actually see them buying tickets, do we, in the footage? Were you able to find any footage or CCTV evidence that helps to explain how they got their tickets?
A.[DI EWAN KINDNESS] I can't recall the tickets being purchased.
Q. Then in terms of the journey south, I think you told us that there were no cameras on board the train, is that right?
A. That's correct.
Q. When they got to King's Cross, in terms of the available footage, although there were quite a few cameras at King's Cross station, is it right that the only cameras that were recording for the relevant time was a camera in the tunnel?
A. There were 76 -- it was a temporary system. King's Cross underground had a temporary system in place. 76 cameras moving in sequence from one second at a time. Fortunately for us, at the appropriate period, between 8.30 and 8.50, it sat for 20 minutes on that one camera and that allowed us, at that period, they came through and we got the first sighting.
Q. Is there any footage of the mainline station as opposed to the Thameslink station?
A. When you say "mainline", do you mean mainline King's Cross?
Q. Yes.
A. At some distance away?
Q. Yes, is there any footage, CCTV footage -- you referred earlier today to many, many hours of footage that would be relevant to the emergency response.
A. I mean, King's Cross mainline footage was that which Hasib Hussain has been identified on, so that's some of it. Of course, it's quite a large estate, but there is definitely King's Cross mainline footage.
Q. So if anyone wants to look at footage of the platform or of the escalator, there is footage that has survived of all of those different areas of the mainline station?
A. I would -- I mean, we'd have to check the schedule, sir, but from my understanding, that would have been seized and certainly was viewed, so it would be accessible, yes.
Q. Was it possible to find CCTV footage showing the area of the station where the witness, Joseph Martoccia,
A. Could you just provide me a little bit of information about what he sighted, sir, just to refresh my memory?
Q. He was a witness who described seeing the group. He described four to six Asian males with rucksacks, and hugging and euphoric I think --
A. Certainly euphoric, but, no, there was nothing, we looked for that, sir, and there was nothing at all.
Q. That wasn't covered by cameras?
A. No.
Q. In terms of the platforms and the Circle Line heading west and the movements of Mohammed Sidique Khan, presumably you looked but that wasn't covered?
A. That's correct.
Q. And heading east and the movements of Shehzad Tanweer, presumably you looked --
A. Yes, we did.
Q. -- but there was no coverage of him boarding the train?
A. At King's Cross?
Q. At King's Cross.
A. No.
Source: Transcripts, 14 October 2010
Afternoon session, p57, Line 19 on

From this we learn that "a temporary system" of 76 cameras was installed at King's Cross, but that it malfunctioned for 20 minutes between the crucial period of approximately 8.30am - 8.50am on the 7 July 2005. This "malfunction" left just one of 76 cameras actually recording CCTV footage. Fortunately for the investigating officers, the one camera which remained in operation happened to be the one which was trained on the tunnel between the King's Cross Thameslink station and King's Cross mainline station. This one CCTV camera captured the image shown above.

The distance between the Thameslink tunnel where this image was captured and the King's Cross underground lines is shown on this map: 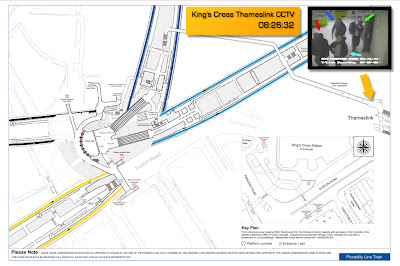 Click to Enlarge
Note: The account of this image being the key that led the investigation back to Luton station has been thoroughly discredited under questioning by Ms Gallagher QC, counsel for the bereaved. This is examined in detail here.

This means that:
It isn't clear yet whether any CCTV exists from the trains as Patterson didn't question DI Kindness on this issue but, given the following account from Rachel "North", it would be surprising if footage from the trains didn't exist. At a meeting in May 2006 between survivors and bereaved and the then Home Secretary, John Reid, Rachel "North" noted:

Over to the questions. The first question was from a man who lost his boyfriend at Russell Square who wanted to know if there were CCTV images of the bombers on the trains, and whether he could see the last minutes of his loved one. The Counter Terrorism representative said that there were, but they had not been released, as the post-bomb CCTV images 'were disturbing'. Dr. Reid promised to investigate whether images of the train before the bomb could be shown privately to the bereaved man. It sounded like the CCTV images were not of good quality.

If DI Kindness' statement is correct, and the image shown above is the last sighting of Khan, Tanweer and Lindsay, any footage that might exist from the trains will not show any of the three accused.
So, what about any other crucial CCTV from the events of 7 July 2005 that might go some way to proving that the four accused were actually on the trains and the number 30 bus?
There are reams of footage showing Hasib Hussain in and around King's Cross and the Euston Road, but what about the footage from Hussain's infamous trip to MacDonalds, where it is claimed he inserted a 9 volt battery, purchased minutes before from W.H. Smith, into his 'malfunctioning explosives'?

Q. Finally this, Inspector: the movements of Hasib Hussain, you've shown us the various bits of footage of his movements and of the buses. Was there any footage from inside McDonalds restaurant where he seemed to be present for some 8 minutes?
A. There was no footage. We recovered the CCTV from McDonalds, but unfortunately the system was -- the recording was stopped prior to him going into that location.
Q. So there were cameras, but for some reason they weren't recording?
A. There were cameras and, in fact, you see the office manager in the office going to the video machine and switching the "stop" button and it stops.

How about footage from the Number 91 bus that Hasib is alleged to have boarded before allegedly switching to the Number 30 at Euston Station?

Q. Then finally the buses. The number 91 bus that he was believed to have taken along the Euston Road, no cameras inside that bus?
A. No, sir, no.
Q. Is that because there were cameras and they had malfunctioned or --
A. I can't recall the reasons why, but it was a main priority for us to find him on the bus, as you can see by our actions on the night of the 7th, to get the route 30 bus footage to identify him. So when we had the witness statement stating that -- the 91 bus, that was a priority for us to identify it and, for whatever reason, we didn't identify that footage. So I can't say at the moment whether that was malfunctioned or it wasn't there, it was recorded over, but for one of those reasons why we didn't have access to it.
Q. The same with the number 30 bus, there were cameras, but it wasn't --
A. The route 30 bus had malfunctioned earlier in the year, so we identified it that night, we viewed it that night at the laboratory, and it showed footage from earlier in the year, nothing of the date in question.

So, no footage of Hasib Hussain from the Euston Road boarding the Number 91 bus, nor is there any footage from Euston station of him boarding the Number 30.
For over five years J7 have been calling on the government to 'RELEASE THE EVIDENCE" but, as a result of the revelations during the first week of the Inquests, perhaps we need to change our demand to, "WHERE IS THE EVIDENCE?"
Posted by Bridget at 10/17/2010 02:53:00 pm