The Bodies On The Line

Documentation produced by the authorities during the inquest indicates that the bodies of six of the victims of the Piccadilly Line bombing were found outside the train, presumably having been blown from the first carriage by the force of the explosion. 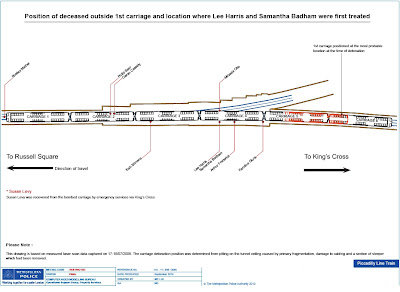 INQ10283-12.pdf
Mihaela Otto is shown as having been found on the platform side with Inhab Slimane, Lee Harris, Samantha Badham, Arthur Frederick and Karolina Gluck located on the opposite side in the narrow space between the train and the tunnel wall.

This in itself seems surprising. Given that the explosion took place near double doors on the platform side of the carriage it would surely have been more likely for the majority of the bodies to have exited there?

There is no doubt whatsoever that the carriage was packed and congested. Many passengers testified to this in their statements.

Sharon Broome, a senior forensic case officer submitted a written report as an expert witness which was read to the court on the 2nd February. In this [page 54:25] she confirmed that “the explosion occurred within a packed commuter train” and that “The relatively localised nature of the damage observed within the carriage is due in part to the explosive force having been absorbed by the people present at the site of the explosion”. [55:9-12]

The schematic diagram (INQ10283-10) confirms that every seat in the carriage was occupied with seven survivors identified from the passengers who were standing in the area between double doors D5 and D6. 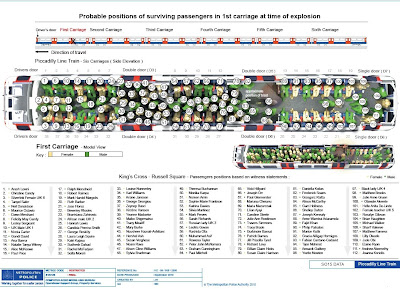 INQ10283-10.pdf
Tragically many others who were standing in that location did not survive. It is apparent that there must have been a large number of passengers located between the bomb and D6 and that they would have caught the full effects of the explosion. Yet, if the official version is correct, D6 must have been so damaged that the five mentioned above were blown out through it. Admittedly many of the windows may have been blown out but it seems highly improbable that the victims would have been catapulted out of these over the heads of the seated passengers!

David Boyce, a station supervisor at Russell Square, giving evidence on the 1st December described entering the train and the scenes that he encountered. Despite it being put to him by Hugo Keith QC that “The doors had been blown away by the force of the explosion had they not?” [120:17] he maintained that the doors were there, but that they were buckled.

Patrick Barnes, a passenger, gave a statement on the 25th November 2005 which was read to the inquest on the morning of the 6th December. He described making his way to the front of the carriage as “There was no way of getting out either side as they were closed”. [110:3-5]

A witness to the London Assembly Review Committee, 'George', who was also a passenger in the carriage stated “There were people saying get the doors open. We will smash the doors. Somebody tried to get the door open where I had my back up against but they soon gave up because I think the pressure was still on the actual door mechanism, and they gave up.” [page 128]

In a statement that was read to the Inquest on the 17th January, a month after the Piccadilly Line evidence had been concluded, Peter Sanders, who was a group station manager based at Kings Cross, recalled going into “what I thought was the front car. I could see a door had been blown off and the other one was hanging loose, I assisted in removing this door.”[54:14-16] This certainly seems to have been a remarkable demonstration of concern for his employer's property given that the the carriage was devastated by the effects of the bomb, in semi-darkness and strewn with dead bodies and body parts!

Possibly the explanation is that Mr Sanders was describing another carriage. A colleague of his, Simon Cook, recalled during his evidence on the 6th December, that he had had a meeting with him “in the area of the crossover”. Then when asked if he recalled. “any other London Underground staff other than yourself and Mr Chaudhury” being in the first carriage, not the remainder of the train or the crossover, Mr Cook replied “I don't recall any other underground staff being in the first carriage, no”.[48:23-24] 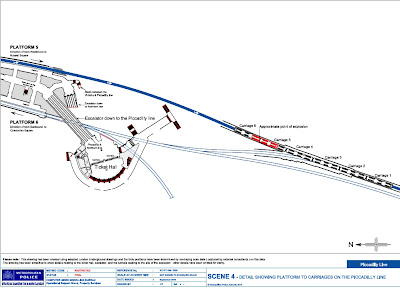 INQ10283-8.pdf
It seems that when the stricken train stopped, carriages three and four were in a position straddling the crossover between the east and west bound lines. The significance of this is that the space at either side of the carriages, particularly on the platform side, is wider there than in the normal tube tunnel. For it to have been possible for the six deceased to have ended up in the area between the train and the tunnel wall, they must have fallen out of the first carriage as it went past the crossover and not before it, where the explosion took place, or after it where carriage one finished up, as both those points are in the narrow tunnel [diagram INQ10283-12] where there would not have been enough space for the bodies to land.

Interestingly another witness to the London Assembly Review Committee 'Ian' described being blown out of the carriage but hitting the wall of the tunnel and bouncing back in. This can be read on page 179.

Richard Barnes (Chair) So, you were almost blown out of the carriage?

Ian “I was; I was blown out and then back in. There are electric cables running along the tunnel, and that is what I hit.”

[Editor's Note: Interestingly there was no testimony from 'Ian' to the 7 July Inquests proceedings and there is no 'Ian' included in the diagram of survivors from the carriage provided by the MPS.]

So the official theory presented to the Inquest is that the blast took place whilst still in the narrow part of the tunnel but that the train moved forward past the point of the explosion eventually stopping as outlined above.

Diagram INQ10283-12 does show all six of the passengers lying beside the fourth carriage in the crossover area and Mr Keith and his team helpfully produced a photograph (INQ10340-1) which is said to show a pair of surgical gloves which were used in the treatment of the stricken passengers as the lay between the train and the tunnel wall. (It has to be said that, at least to the naked eye, there doesn't appear to be any sign of broken glass or other debris from the explosion). 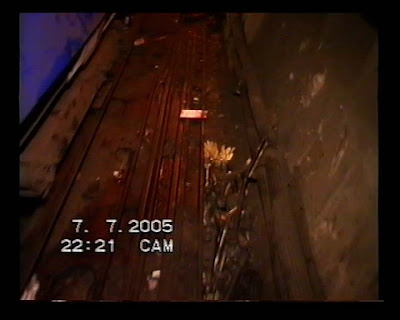 INQ10340-1.pdf
There doesn't seem to have been any expert evidence produced to explain how the direction of the explosion blew out five people from the far side of the carriage.

Admittedly there have been reports from other locations of train doors opening and closing again as a result of mechanisms being affected by the explosions. This could have happened here and the five passengers may have been pressed up against the door due to the crowded conditions. In that case there certainly would have been many passengers located between them and the bomb which might have been expected to 'cushion' it's effects, but the injuries sustained appear to have been caused by the explosion rather than just the consequences of falling from the train.

Also, if the door was buckled as Simon Cook reported (or hanging loose), it is difficult to envisage how it would have shut again?

Being as objective as possible it could be said the official version of events is just about possible; but is it really probable?

*David Minahan was by occupation a claims investigator for an insurance company and later a leading firm of solicitors in which David gained experience of "forensic" matters. David was also the National President of a major Trade Union (MSF now merged with the AEEU to form Amicus). David researched and wrote the London Bombings Dossier published on the J7 website and says he is convinced that there has been a massive cover up and campaign of disinformation about the events of 7/7.
Posted by Bridget at 4/25/2011 11:24:00 am