In a previous post we examined the alleged 'disintegration' of Shehzad Tanweer in the explosion on Circle Line train 204 at Aldgate/Liverpool Street, and the way in which the number of deceased at the location was consistently numbered as 7, a figure that didn't include the alleged perpetrator as one of the deceased.

It is also worth noting the following information in relation to the identification and naming of Tanweer as the alleged perpetrator of this explosion.
Enlarge 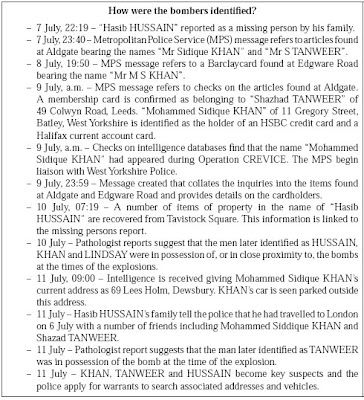 Source: p15-16 Intelligence and Security Committee
Could 7/7 Have Been Prevented?
Review of the Intelligence on the London Terrorist Attacks on 7 July 2005
As we can see from the timeline above, the Pathologist report into the 'spine' was carried out on 11 July 2005. This was mentioned by pathologist Nathaniel Cary in his testimony, although during this testimony to the inquest no date was given for this examination. [Transcripts p16 lines 8]

Forensic scientist Andrew McDonald did give a date for his examination of the alleged remains of Tanweer when he noted that he had received:

"Between 13 July 2005 and 28 July 2005, 80 recovered body part samples associated with the bombings of a London Underground Tube train at Aldgate on 7 July 2005 together with 20 reference control samples from individuals known to have been present at the time of the explosion were received at the laboratory. All items were received in sealed packages.

"I was asked to carry out STR profiling tests to determine whether any of the recovered body part samples received in this case could have originated from Shehzad Tanweer. STR profiling is a sensitive DNA analysis technique. An STR profile obtained from a human body fluid, such as blood or saliva, or human body tissue can be compared with an STR profile of a given person. If the profiles are different, then the body fluid or body tissues cannot have originated from the person in question.

This ties in with the timeline given in the ISC report above -- although we now know that the viewing of the accused on CCTV at Luton station occurred some time before 12 July 2005 -- which states that the DNA analysis confirmed all four accused on 13th, 15th & 16th July.

So, let's presume that the person identified by DNA on 13 July 2005 was Shehzad Tanweer, although we cannot be certain of this, and ask ourselves how the following statement given at a press conference by Assistant Commissioner Specialist Operations, Andy Hayman of the Metropolitan Police, could have been made a day earlier:

'As regards the man who was reported missing, some of his property was found on the Route 30 bus in Tavistock Square.

'We also have very strong forensic and other evidence, that it is very likely one of the men from West Yorkshire died in the explosion at Aldgate. This, of course, is subject to formal confirmation by the Coroner.

Sources: Timed press release shown above
'One week anniversary' bombings appeal - Metropolitan Police Service
What forensic evidence did the Metropolitan Police Service obtain to confirm the presence of Shehzad Tanweer by 15.47 on 12 July if, as demonstrated above, the forensics were only just beginning to be carried out a day later on 13 July 2005?
Posted by Bridget at 11/11/2010 12:01:00 am