7/7 Inquests: Danny Biddle, the Rucksack on the Lap - and the Explosion on the Floor

Yesterday, 8 November, saw Danny Biddle as the opening witness at the 7/7 Inquest with regard to the Edgware Road incident (Factual Issue 3: Circumstances at each of the four scenes immediately following the explosions).

As the only witness to ever publicly claim to have actually seen Mohammed Sidique Khan on Circle Line train 216 at Edgware Road the media paid close attention to his testimony. Today's headlines scream out:
However, there is more to the headlines than meets the eye, and more than might be gleaned from the media reports of Mr Biddle's testimony.
J7 have previously highlighted the many inconsistencies in Mr Biddle's accounts in our Edgware Road analysis on the July 7th Truth Campaign website. We also included this information in our submissions to the Inquests in the J7 response to factual issue 2. The many and varied accounts of Danny Biddle, as reported in the media, were referenced by Hugo Keith as Danny Biddle gave his testimony:

A.[DANIEL PAUL BIDDLE] No, I mean, there was nothing about him that made me think he was dangerous in any way or anything like that. If there would have been, I would have got off the train and got help. I mean, he was just a -- he looked like a normal guy going to work within London, whatever he did, and there was nothing that he did that made him stand out different to anybody else at that particular moment in time.
Q. [MR KEITH] Do you recollect him carrying anything?
A. He had a rucksack, like a small, black camping rucksack.
Q. Was he holding it or carrying it in a particular way that you can recall?
A. I remember it being on his lap.
Q. Mr Biddle, not unsurprisingly, the story of how you survived the bomb at Edgware Road has been widely reported in the press and around the world and a number of reports have purported to give accounts of your experience and memories of that day, and in those accounts there are repeated references to the possibility that the man might have been wearing a rucksack on his back, and that is what you recollect.
A. I've said all the way along from the very first statement I gave to the police he had it on his lap.
Q. Did he have one rucksack or two, or one or two bags? Was there anything else that he was carrying?
A. No, I just saw one rucksack.
Q. Can you tell us a little bit more, if you can, about the size of it?
A. I would say it would be about so big. It wasn't -- it was one of those sort of small camping rucksacks that you often see people that are going hiking would carry, so it wasn't like a full-sized camping rucksack, it was just a small to medium-sized camping rucksack. As I say, so big. [p31, 18 on]

Mr Biddle then continues with his testimony which, as noted above, has been widely and unquestioningly reported as an apparent confirmed witness account of Mohammed Sidique Khan allegedly detonating a suicide bomb at Edgware Road:

[MR BIDDLE] The train entered the Tube tunnel, I looked round, as I looked round, he looked up, I just saw a quick movement, then there was just a big, white flash, the kind of noise that you get when you tune a radio in, that kind of white sound, and it just felt like the carriage I was standing in filled -- just expanded at such a vast rate and contracted quickly and, with that, it blew me off my feet and through the carriage doors into the tunnel.
Q.[MR KEITH] When you say you saw a quick movement, what do you think was the movement that you saw? Was it some part of his body, or was it a movement in the bag?
A. It was his arm, he did that with his hand in the rucksack and the next thing --
Q. Because these proceedings can't record what you've shown us, did you just demonstrate that you saw an arm move somewhere near the rucksack?
A. That's correct.
Q. Did you see what precisely moved or whether there was any movement in the rucksack itself?
A. Literally, as soon as his arm moved, I was outside the carriage.
Q. Do we take it from what you've said that the rucksack was still on his lap, or was it on the ground?
A. When he made the arm movement, the rucksack was still on his lap.
Q. Were you able to discern any sort of expression or any sort of look on him at that moment?
A. I mean, before he set device off, he looked up and along the carriage and then he just looked down. He didn't say anything, he didn't shout anything that I can
remember hearing. He just put his head down, moved his arm and, the next thing, I'm outside the train.
Q. What was your first conscious thought after that?
A. I'd fallen out the train. [p33, 8 on]

Later in the proceedings Mr Biddle is questioned by Mr Saunders, representing some of the bereaved:

MR SAUNDERS: Mr Biddle, I will be equally short. You have described to Mr Keith seeing Khan's arm moving quickly. In your statement in December I think you gave a little more detail where you thought you'd seen him with a white cord at the rucksack?
A. That's correct.
Q. That's what you thought was being pulled?
A. That's what it looked like. As he pulled his arm, that's what it looked like he was holding, but I couldn't ascertain if that was from inside the bag or part of the bag. [p44, 21]

As J7 noted some time ago in our analysis of the various statements of Danny Biddle reported in the media, the Metropolitan Police have always maintained that the explosions occurred on the floors of the train carriages. This means that, according to the Metropolitan Police, the explosion at Edgware Road also occurred on the floor of the carriage:

At this stage, we do believe, however, that each device that was put onto the tube trains was likely to be on the floor of the carriage. [DC Andy Hayman, 8 July 2005]
Source: J7 'The suicide-bomber theory gestates'

That the explosions occurred on the floors of the trains was further confirmed during the trial of Waheed Ali, Mohammed Shakil and Sadeer Saleem when the testimony of Fort Halstead Forensics expert, Clifford Todd, was reported:

The bombers scattered identity and bank cards around the Tube carriages they targeted before placing their rucksacks on the floor and setting off the explosives inside them, jurors heard.

The details emerged for the first time as a forensics expert's evidence was read at the trial of three men accused of helping to plan the atrocity.

Jurors were told the "unique" bomb mixture was made up of black pepper and hydrogen peroxide, which was put into ordinary plastic bags alongside ice-packs to cool the volatile material.

The bombers were not wearing the rucksacks at the time of the explosions, but had instead put them down on the floor of the bus and Tube trains, it was claimed.

He said: "It is, in the opinion of Mr Todd, noteworthy that at each scene, some personal materials and documents, such as ID cards, were found relating to the bombers.

"Although they were damaged to some extent, they did not show the damage that would be expected if they were on the body of the bomber or in the rucksack, suggesting that in each case they had been deliberately separated by some distance from the actual explosion."

The problem that the Inquest now has is that of squaring the testimony of Mr Biddle -- an eye-witness sighting of a detonation by pulling "a white cord" on "a small, black camping rucksack", of which Mr Biddle remembers "it being on his lap" -- with the official version of the story that states the explosion occurred on the floor of the carriage.
On the floor of the carriage some distance from where this diagram and Biddle have placed Khan in a seat: 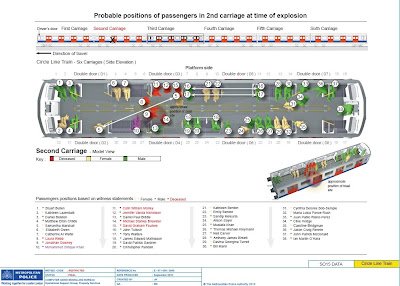 This graphic shows that Khan was allegedly in the seat marked 28 and the blast site at a position to the right of seat 27: 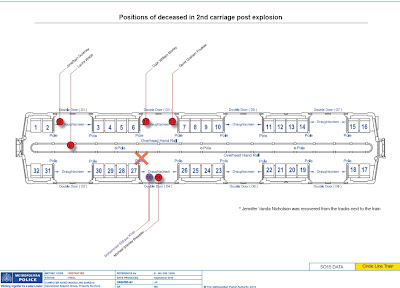 Position of Deceased
No doubt Mr Biddle's testimony will be forgotten by the media once the Inquests move on to discussing matters pertaining to the forensics at the scenes, the types of explosives used, and the method of detonation.
Until then, caution should be exercised with regard to any evidence that attempts to prove that the damage to the Edgware Road train, seen in the image below, was caused by mixing Hydrogen Peroxide with black pepper/masala spice.